Russian propaganda masterminds are trying to put out a fire of the latest scandal over the involvement of Russian military intelligence in the explosions at ammunition depots in the Czech Republic by accusing the Czech Republic and Bulgaria of supplying arms to the Islamic State.
What happens when a criminal is caught red handed or even after a while? Naturally, during interrogation, they make up excuses, inventing unrealistic stories in order to claim innocence or at least explain the motivation behind their actions. And this is exactly how Russian propaganda always behaves in relation to the crimes committed by their intelligence agencies.

The Skripal family poisoning in Salisbury? It wasn't us! Our military intel operatives just happened to be in town, sightseeing. That's Russia's classic position of denial. Blasts at an ammunition depot in the Czech Republic? It wasn't us! But even if it was, though, this ammunition was intended to be supplied to ISIS terrorists, so Russia rendered a good service to the whole world in the name of peace! 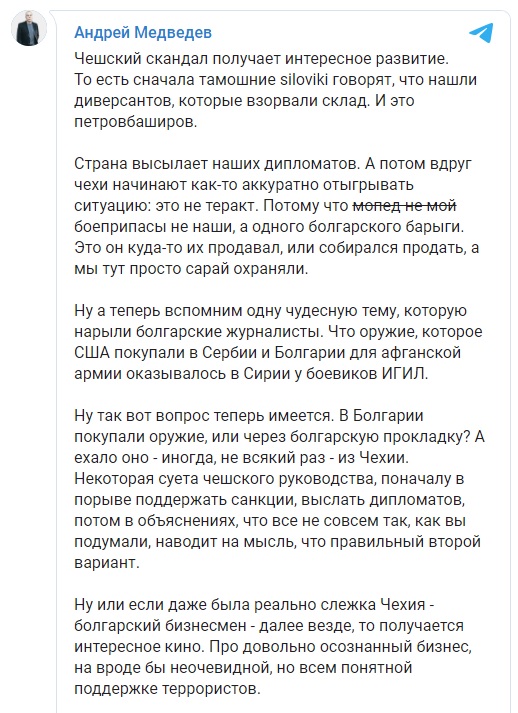 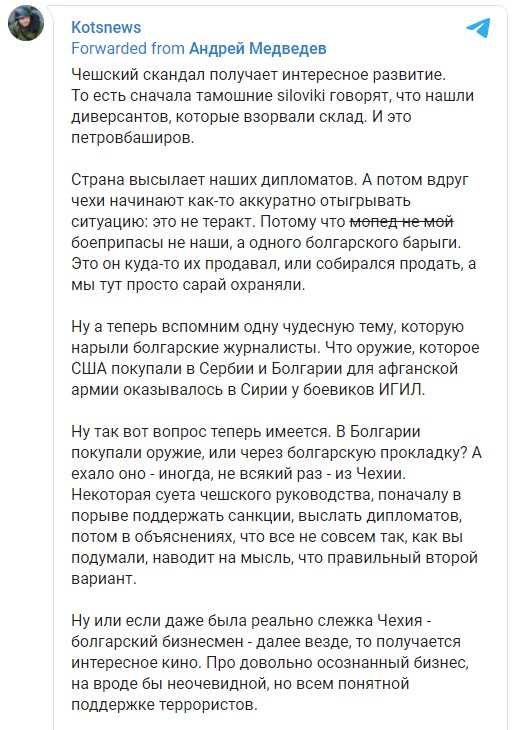 So this is exactly the narrative that has been spreading in the Russian media space in the last 24 hours – weapons and ammunition stored in a warehouse in Vrbetica were intended to be delivered to the Islamic State via a Bulgarian arms mogul Emilian Gebrev. Incidentally, Russian military intelligence also tried (unsuccessfully) to physically eliminate the latter with the Novichok nerve agent.
Anyway, any attempts to justify such hostile act on foreign  soil boil down to blatant lies. And here's why.
Firstly, it is already a known fact that the ammunition stored at the Vrbetica depot was set to be supplied to Ukraine, which at that time was in active hostilities with Russian occupation forces in Donbas. That is, in fact, Russian military intelligence this way tried to prevent these supplies.
Secondly, Russian propaganda is very often keen to accuse other countries of "support for ISIS terrorists", while always turning a blind eye to Russia's own obvious role in the formation of the terrorist organization.
For example, it was the Russians who were the second largest foreign group in ISIS ranks. And only in Russia could citizens leaving for Syria from the Dagestan Republic to join ISIS later obtain medical insurance at the region's Compulsory Medical Insurance Fund. At the same time, insurance, benefits, free medicines and other payments were paid through the Federal Fund, that is, from the Russian national budget.
I'd like to note that all this was happening in the region where the FSB security service has long reigned unhindered. So it would be too naïve to suggest thousands of future ISIS fighters had been deployed and insured without the agency's full knowledge.
And now the most interesting thing!
The thing is that Russia has been regularly slamming its competitors in the arms market across media platforms. Often, such media attacks were of a discriminatory nature, implying wide circulation of explicit or veiled disinformation. A scheme has long been applied against Eastern European suppliers of arms and ammo, where they were accused of allegedly supplying weapons to ISIS. And the main distributor of these manipulative reports was a Bulgarian journalist, Dilyana Gaitandzhieva. 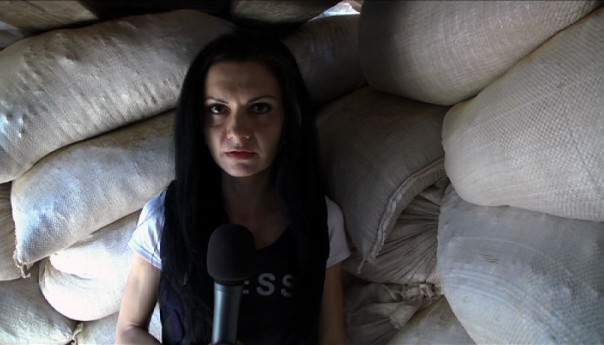 The so-called "independent" journalist, Gaitandzhieva has long been working for the information department of the Russian military intelligence. But, she hasn't always been "independent".
Gaitandzhieva previously worked for the Bulgarian Trud newspaper. But in 2017, she published an unforgivable fake story alleging that Azerbaijan's Silk Way Airline had for more than three years been supplying weapons from Eastern Europe to hot spots around the world. The documents that Dilyana published in the Trud to back her claim turned out to be fake, albeit mixed with original papers to complicate the verification. As soon as Dilyana's "documents" were exposed, she was immediately sacked.
After Dilyana was disgraced from the Trud, not a single serious and self-respecting media offered her a job. But, what is most interesting, Gaitandzhieva immediately sealed funding for her work and started posting sensationalist investigations, which, for some reason, resonated quite well with Russian propaganda.
For example, after the spin targeting Azerbaijan, she took up Georgia, talking about how in the Lugar Center the Americans, under the guise of medical research, create new types of biological weapons and test them on Georgians!
In October 2019, in the Arms Watch outlet, where Gaitandzhieva is an editor, and which is funded from Russia, a piece was published claiming the Serbian 60-mm M73 HE mines, produced at the Krusik plant, were supplied to Ukraine through the United Arab Emirates ... It was noteworthy that all the facts voiced by the "journalist" date back to 2016, and the evidence alleging the use by Ukraine's Armed Forces of 60-mm M73 HE mines is accompanied by comments either by representatives of the unrecognized "DPR" or Russian propaganda outlets, including Zvezda, an outlet supervised by Russia's defense ministry.
But here's one more important thing!
Dilyana Gaitandzhieva started circulating her fake story about 60-mm M73 HE mines precisely when an espionage scandal broke out in Serbia, exposing the operations of Russian military intelligence on Serbian soil.
What a familiar twist, indeed: in order to hide their crimes in another country, the latter is accused of certain actions that should either block the negative information flow about Russia or justify Russia's actions.
And, incredibly enough, we can still observe how in the context of the Czech  ammo depot explosions, Russian propaganda is using coverage by Gaitandzhieva to at least justify their criminal actions if their "this wasn't us" mantra doesn't work this time. These criminal acts by Russia, by the way, could well be qualified as a terrorist act or even an attack on a NATO Ally.
But, the cliché response and the use of long-compromised figures, notorious for massively spreading Russian fake news, levels such attempts from the start. On the other hand, like many Russian fake stories, this one is aimed primarily at domestic consumers.
Tags: english
Subscribe
promo